Millimeter Wave Beams Power Next Generation Rockets into Orbit and Beyond 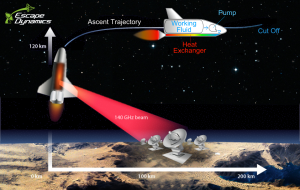 There are few pioneers working towards commercial space flights with a proven reusable launch vehicle.  The design platforms are varied, but one fundamental element remains the same.  Most rely on rocket thrust to propel into space.  This science was developed over 1500 years ago when the Chinese invented rockets and by 1914 Robert Goddard was awarded a patent for rocket propulsion.(seen here).  Whether you look as far back as 1500 years or to 1914, the concept is the same.  A controlled chemical explosion is what lifts you into orbit.  It’s about time new technology is introduced to the world of space flight.

Today in research labs around the world, scientists, engineers, and companies like Millimeter Wave Inc. of Largo, Fl who provide components and sub assemblies for the millimeter wave industry are working on  technology that will fuel affordable and attainable flights into outer space with updated and efficient technology. If successful, they will be part of a quantum leap in propulsion systems that will eliminate the need for conventional rocket systems, and make way for millimeter wave technologies.

In theory and small scale testing, it has been proven that millimeter waves can eventually take the place of traditional chemically fueled rockets.  In the millimeter wave launch system, the energy needed is delivered externally in the form of a millimeter wave beam.  The beam shoots at the space vessel from a ground based facility and converts into energy used for propulsion. This method  completely avoids combustion making it much safer and more efficient.  The thrust created is also 10 to 20 times greater than conventional rockets.

This new system may seem radical, but Kevin Parkin, the Deputy Director of the Mission Design Center at NASA Ames, believes one day millimeter wave based antennas will lift a rocket into outer space. He’s already received a US patent (Click here to see patent) that uses millimeter waves to launch spaceships.

Here is a small scale test video showing an example of a millimeter wave powered rocket.


Companies like Escape Dynamics, in Colorado, USA,  are also concentrating on this innovative technology.

Stated on Escape Dynamics website is the following:
“One of the driving ideas of our propulsion work is realization that chemical rockets are fundamentally limited in their efficiency and that there are better ways to provide energy necessary for aerospace transportation. We are actively developing highly efficient space launch and space propulsion systems based on our patented microwave propulsion technology.” – Escape Dynamics Website

Researchers are also investigating another form of propulsion via nuclear reaction.  In theory, millimeter waves would be used to target specific elements that would induce fusion.  Harnessing fusion  however, is not easy.  The general idea here, is not just for lift, but for long distance space flights, where an onboard fusion reaction would need to be sustained.

Millimeter wave energy continues to be a growing area of research, development and application. It has already revolutionized other industries such as telecommunications,(cell phone backhaul), medicine, and weapon systems.  For now, we remain on the edge of our seats waiting to see how millimeter wave technology will revolutionize space travel.

For more on Millimeter Wave technology visit our website at www.MIWV.com or our youtubepage by clicking here. Millimeter Wave Inc. is a global leader in millimeter wave and microwave components, sub assemblies, research, design and testing.